How can we help you today?

Clicking on the left pad button the user can access the tool pallette: 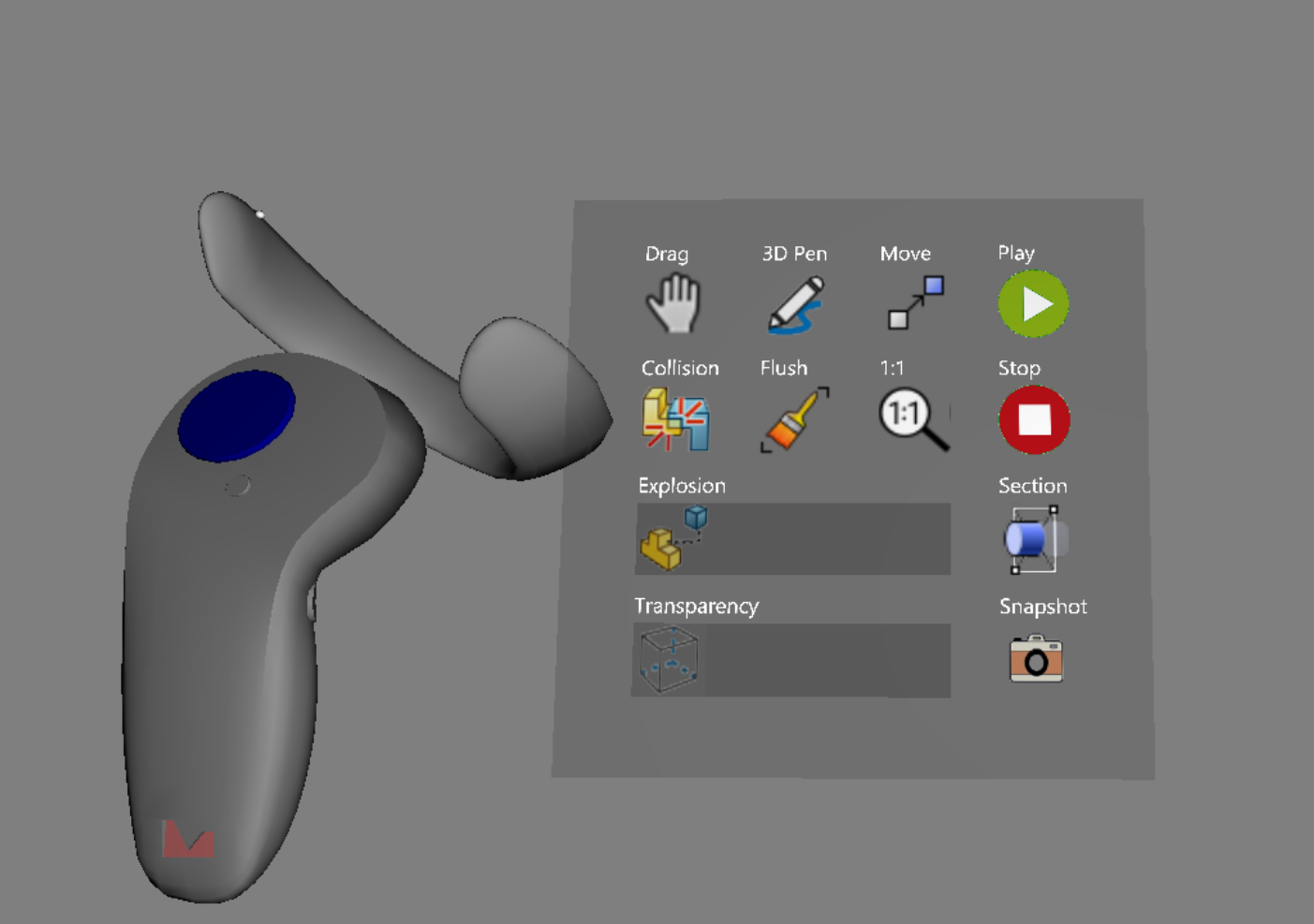 Each function can be activated by clicking on each or dragging the slider.

When a function is active, the icon will be highlighted in a different color.

This function allows the user to drag parts by clicking and dragging them while keeping the right trigger pressed.
Any change done in VR will be reflected in real time on the CAD file and vice versa.

NOTE: it will only be possible to drag parts along the movements allowed by SOLIDWORKS' kinematics.

By activating the collision detection, the user can drag parts just like with the drag function, but in case there's any overlap between the selected part and another, both will be colored in red.
This function is useful to detect parts that may b "grinding" or having another sub-optimal type of contact in movement.

A free-drawing tool to take notes in 3D. All the comments and markups are VR-only, no trace of them on the CAD file.

This function deletes any comments made with the 3D pen.

As the name suggests, this functions allows to move freely single parts. This is a VR-only function, any modification made through it will not be shown in the CAD file.
It's useful to test serviceability, to practice assembly procedures and/or to have freedom of interaction with the 3D model.
Any modifications made through the move function can be reverted to default simply by selecting the drag function.

By pressing this button the user locks or unlocks the scale to 1:1 .
Useful to have a natural perception of spaces and volumes.

NOTE: Mindesk is geared to work with MKS unit systems. If you use another one, the software will interpret those units as meters. Example: if you use MMGS and go to 1:1 scale, your model will appear shrunken 1000 times; in order not to incur in such issues, please remember to switch to MKS units before pressing the 1:1 scale button.

Play and Stop buttons will trigger SOLIDWORKS animations. Animation settings are taken from SOLIDWORKS itself.

The slider controls the assembly explosion. The explosion settings are taken from SOLIDWORKS itself.

The slider controls the assembly transparency. The transparency settings are taken from SOLIDWORKS itself.

This tool allows to freely position a section plane. It's possible to use it even when animations are running.
The section plane is represented by a white circle. You can snap the section plane to an axis when the circle becomes of the same color of the axis to snap it on.

Just like a virtual camera: after selecting the snapshot tool, you can take pictures of the virtual experience simply by clicking the right trigger. A brief flash will appear, together with the file path where the picture has been saved.

If there's a SOLIDWORKS function that you would like to use in VR, please let us know! If your idea makes sense, we'll try to make it happen.

Did you find it helpful? Yes No

Send feedback
Sorry we couldn't be helpful. Help us improve this article with your feedback.